I love you Little P

Oh my dear little Percy.  Little did you know that when we went to the MCHS rescue to see if there was a dog we'd like to foster, that it was the man that picked you out.  Not me.  My instincts said No.  I wasn't sure why.  But it was the man's turn to pick out our next foster and he thought..  "Cute - check, small - check, likes her (me) - check.  Should be easy to get him adopted"  You know the saying, Man makes plans - God laughs     But I'm glad he picked you. 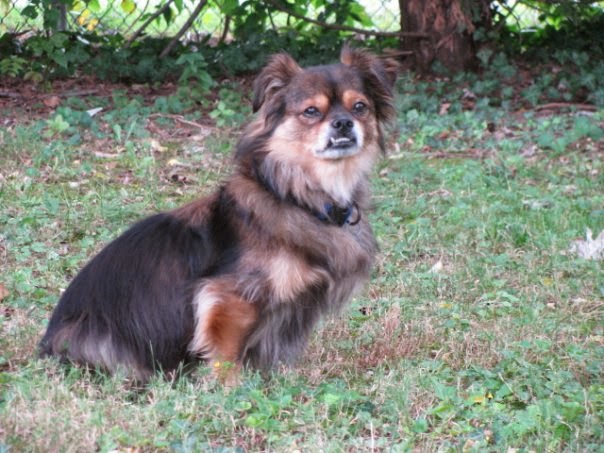 I tried so hard to get you adopted. I  brought you to two adoption events, but you didn't do well at them.  You didn't like the other dogs there, nor did you particularly like the people.  You really didn't like people that came to the house either.  You went after our neighbors very gentle son, our kid's friends and in particular our daughters boyfriend, anyone that Doobie and Belle barked at - even if it was a happy bark.  You really didn't know what to do with those two.  When they acted like silly dogs you'd run over and bite at their legs as if to say "Stop It!  What are you doing?"  You even went after the man that picked you to come home with us.  Yes, he did trip over you, twice, but you blend in with the floors and the couch so well.
You were with us for 3 months before I ever saw you raise your tail in a happy wag.  And then the day came.  You were adopted!   We'd found out the day before you went home with her that you had kidney stones. And 5 days later, you were returned. It was going to cost the adopter $1500 that she wasn't ready or able to spend.
That was it.  I thought that would be the end of you.  The shelter wouldn't spend that kind of money and I didn't have it.  So I called our friend Mary, co-director of the rescue Hedgesville Hounds, and left a message of what I thought would be your demise.  I didn't expect her to do anything,  I just needed to talk to someone to help me accept it.  Lo and behold, Hedgesville Hounds offered to pay for your surgery!  They saved your life, Little P.
I went back to trying to get you adopted.  On Facebook around Halloween I posted this saying your were desperate and trick-or-treating for a home. 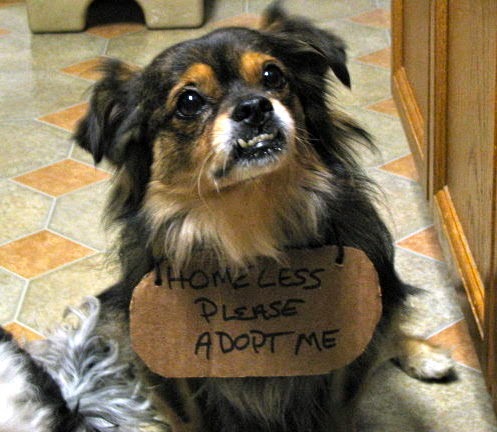 And then I tried this post "Lisa found a lonely Little Dog.  Oh no!  Lisa was working when a lonely little Percy from who knows where appeared at the Humane Society.  She's worried that he may never find a new home because, well, he's a little different.  But he's cute" (This was a parody from a FarmVille post about a little cow or something)
Evidently you were meant to be with me.  Everyone else knew it pretty much from the start.  Everyone but me.  And finally one day, 18 months later to be exact, we realized we couldn't do that to you. We couldn't put you through getting used to another home.  You'd started to relax with us and make yourself at home.  Besides, who else would grow to love you as much as we had?  It finally became obvious that this was your home all along. 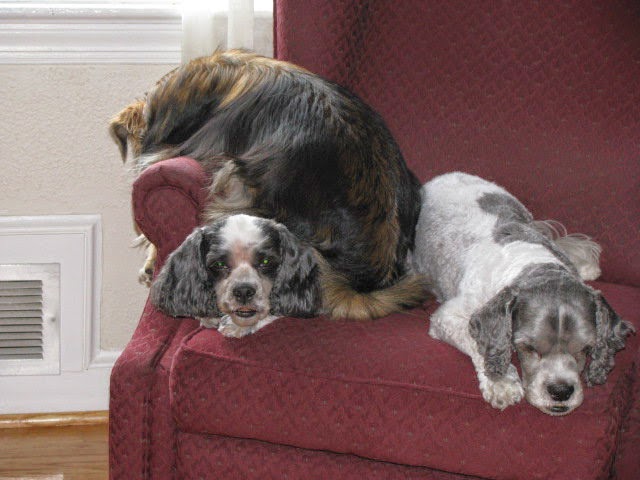 And I thank God for you. Even though you've been a pain in the butt at times, you have been such a wonderful blessing.  I believe that you were put smack dab in the middle of my life for a reason.  If it wasn't for you, I wouldn't have met the wonderful people that came into our lives.  I wouldn't have learned how to manage the issues that special dogs such as yourself, can present nearly as well as I have.  And I don't know that I would be able to relate to and help others with their own special dogs, without having experienced it all myself.  Or maybe someday I would have, but I don't think so.   Because of you and everything that led up to you, I have learned so much. 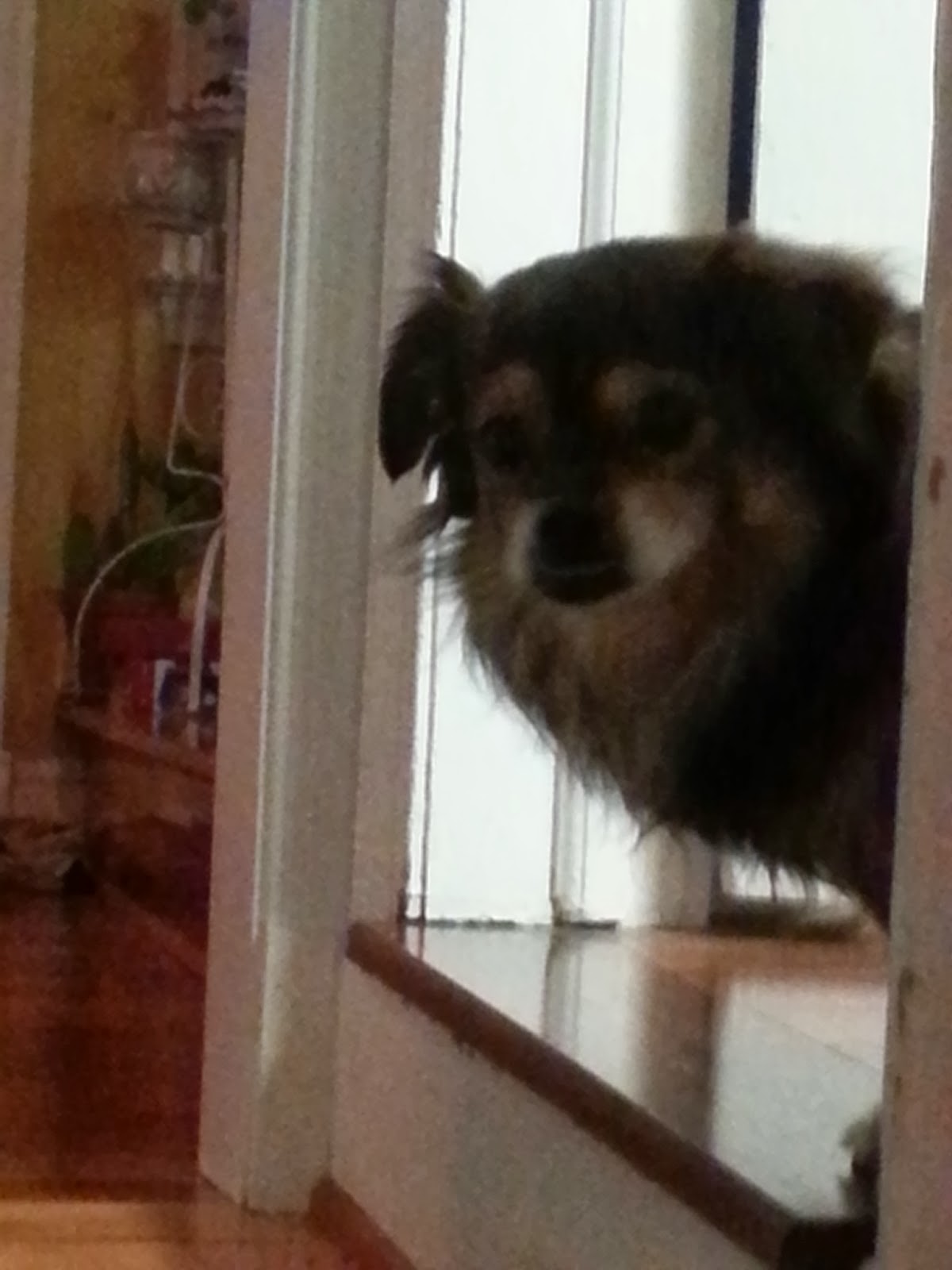 And now, it looks like we are on our final chapter together.  You have prostate cancer.  It's been a few months since diagnosis and, all things considered, you had been doing fairly well up to now.
You will be so missed when you are gone.  You're our special Little P!  I'll miss having you glued to my side every second that I am home.  How, with those same teeth that you'd threaten to take a bite out of someones ankle,  gently and tenderly you take treats. The way that you snort then flop over on the bed for a belly and butt rub in the mornings is so cute.  That so very sweet and loving side that only a few got to see.  And of course there's your "Yay! I pooped!" run through the yard.  I've never seen a dog get so excited and happy about it.
This morning I watched and you yelped while trying to poop.  You've done it before but not like this morning.  This morning there was no "Yay! I pooped!" run afterwards.  I promise I will not let you suffer.  We will try some things with your diet and see if it doesn't help.  But if or when you've had enough..  be sure to tell me.  I'll know the look.  I promise.  I hope.
You will always have a special place in my heart.  I love you more than ever Little P.  We all love you.


May 21, 14
It's now been almost two weeks since I originally wrote and published this but it never felt quite right so it has been edited a few times.  I guess that some things just never feel right. Like having to say GoodBye to those we love.
Posted by Unknown at 1:41 PM 5 comments: Links to this post

On the subject of grooming.. (part 1)


You should have seen Doobie the first day I met him.  The poor thing was so matted that he looked like an afro with feet.  His ears stuck straight out like the wings on an airplane only they were about 2 inches thick with matts and you couldn't see his eyes at all.  I was at his original humans home (I have an aversion to the word "owner") so there was nothing I could do except to try to explain to the woman that those matts hurt and he needed grooming ASAP!  Unfortunately Doobie didn't come home with me that day, but his mother Annabelle did.  She looked more like an old fashioned mop that had been through the ringer a few times too many.  But don't fret, it took a couple weeks, but we were finally able to get the rest of the pups out of there and into foster homes.

Because of the condition Belle was in, the only thing we could do was get her groomed right away.  There wasn't any time to worry about conditioning her to like it - it had to be done.
Fortunately,  I know the groomer.  I used to work with her so I knew first hand how great she is with dogs.  And 10 years later she is still the only one I trust with our dogs.  God forbid she ever retires!
She is the first one I recommend when people ask, usually because they don't know who to go to or they've had a bad experience or, I should say, their dog has.

If your new puppy is going to need grooming, the time to start looking for a groomer is before the puppy comes home.
Not all groomers are alike. Start asking your friends that use groomers who they use.  Then ask them why.  Exactly why.  While I do like the dogs to look good, I'm not picky.  The most important thing is how they are taken care of while they are in someone else's care.  So get specifics.  How is the dog when they go there?  Is he afraid?  Have they ever found any mysterious cuts or problems that should have been brought to their attention by the groomer or receptionist when they picked him up? and so on.  If you like what you hear, see if you can make an appt to go and check them out.
Here is one person's experience with groomers.  I have edited out parts to shorten it.


We first started taking our dog to the groomer at our Vet and I would usually drop him off. Our dog would shake and be scared until he saw the groomer walk up and then his tale would wag and he would go right to the groomer and I just felt like that was a sign he liked the groomer (and not the pokes and shots from the vet!). Long story short the groomer disappeared and the vet said they weren't going to have a groomer anymore.So we started taking our dog to ____ (based solely off of reviews on yelp.com and location) and my husband would usually drop him off. One time though (and the last time), I dropped our dog off and he was crying and clinging on to me and shaking when the lady tried to take him from me. So, I called my husband and asked him if that was common... he said yes (husbands! grrrr!).        Anyway, that is when we asked you if you had a recommendation. You said that you took your dogs to Susan at Kenhaven, and since it's right near my husbands office we figured we'd give it a try. Our dog isn't crying and clinging to us when we leave him and I love that the staff lets us know everything.

Posted by Unknown at 5:45 PM No comments: Links to this post